Where do I begin? I first founded AngelVision in May of 2001. My plan was to develop a process to make sales videos and tutorials. At the time, these were made individually and, therefore, at a very high cost. By developing an efficient process, we were able to cut the costs of production by over 75%.

Our sales soared and we were ranked as one of the Fastest Growing Companies in the US by Inc. Magazine for seven straight years. In that time, we were honored with over to 450 awards and received success stories from over 1000 customers. Times were good.

But around 2013, I started to become very ill. I didn't realize how sick I was because my sickness was misdiagnosed and developed slowly. When I finally saw a doctor, he was surprised that I wasn’t already in a hospital. The worst consequence was that my brain cells were not getting oxygen, which left me with a type of brain coma.

Unable to think, I began making bad decisions, then people around me began to take advantage of my situation. As a result of trusting those around me, my overhead exploded to over $400,000 a month, and despite our record growth, I was forced to close AngelVision in 2016.

It was a long recovery, but we’re back in business.

The key to our success is Superior Messaging.

In 2011, I was named Marketer of the Year by the American Marketing Association and inducted into the Marketing Hall of Fame. The Portland Business Journal called me a “Message Machine.” You can read more about these accolades in the next column.

I only mention this because, for the time being, I will be producing the messages personally. This includes conducting the interviews, writing the scripts, and creating the storyboards.

We returned to the business model that originally made us successful… small teams, more outsourcing and barely any overhead. As a result of this reorganization, our costs and prices are nearly half of what they used to be.

I’m back doing what I love to do most.

Most important, I am happy again. At AngelVision, I spent my time running a business and no time working with folks on their messaging and advertising strategies. This is my unique superpower and what I like to do most.

I’d love to hear your comments about anything on your mind. If you tell your friends about us, we’ll fill large buckets with karma and launch them in your direction. Better duck!

Here are some old press releases about Mike Jingozian and AngelVision. Check back for exciting updates from AngelCore.

AngelVision again Rated One of the Best Companies to Work

Marketer of the Year & the Lifetime Achievement Award for Excellence in Marketing.

Michael Jingozian, the founder and CEO of AngelVision, and now AngelCore, received the 2011 Marketer of the Year Award from the American Marketing Association. 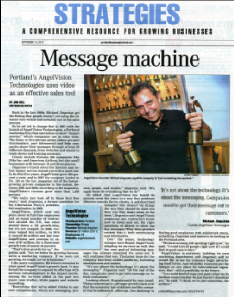 Mike has been called a “message machine.”  Read why in this feature article from the Portland Business Journal.

In this article you will learn the secrets to our success and how this focus on messaging has led to the rapid sales growth for both our customers and ourselves.

I have begun to use the name Gozian on social media for projects not related to AngelCore.

Some haters claim that I have changed my name for some evil purpose. Trust me, if I was trying to hide my name, I wouldn’t choose the same name, without the first 3 letters.

Article: “How I Recovered”

To help others learn from my mistakes, I documented my recovery in an article called, How I overcame, Illness and Depression.

When my hospital’s administrators read this, they immediately asked if I would serve on the hospital’s Board of Advisors. However, the offer was later withdrawn when some at the Christian-based hospital considered “attracting” or “manifesting” to be in conflict with the teachings of Jesus Christ. (This is a common misunderstanding.)

We are always looking for talented and hard-working people who share our vision.

If you feel that you have what it takes to join our team, then let us know. We work hard, but we balance our workload with unbridled fun. Want to celebrate Festivus? Or Pirate Day? You’ll fit right in.

We don’t pigeonhole people with titles. If there isn’t a specific position listed for your special talents, let us know. We’d love to discuss what possibilities may exist for you at AngelCore.

Our Culture and Values

Our culture and business model attract great people. We are rated among the best companies to work for in Oregon. This helps us recruit and hire the finest, most talented people.

Happy employees make happy Customers. Our work environment creates highly functional teams that produce superior results for our Clients. Please feel free to contact us with questions or comments. We are always here to help.

These are some of the current job opportunities that are available. Please send your resume and cover letter to Info@AngelCore.com.

If you ever have a chance to visit Portland, Oregon, then please let me know. I’d love to sit down and talk with you. Portland has the most microbrews per capita than any city in the US. So, the first beer is on me! We also have the largest number of adult establishments, but I won’t talk about that.

Go Oregon!... The only state that has a different image on each side of their flag.